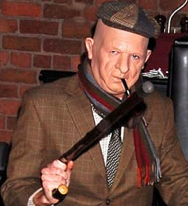 Liverpool FC’s fancy-dress Xmas party is now a fixture on the football calendar. Paparazzi desperately try to get snaps of Liverpool’s players in costume. This year’s party was held a few weeks later than originally scheduled, but that didn’t stop the players pulling out all the stops to outdo their team-mates.
Club captain Steven Gerrard went to the greatest lengths to win the ‘best costume’ award this year. He went as a pensioner, and was barely recognisable beneath flat cap and expensive prosthetic make-up (see photo). He rode into the venue on an electric scooter, pipe in mouth and walking cane in hand.
For more pics of Liverpool’s players dressed as you’ve never seen them before (including Peter Crouch dressed as a penguin, Xabi Alonso dressed as Del Boy and reserve ‘keeper Charles Itandje dressed as Osama Bin Laden, check out the Daily Mail)
Photo Xposure