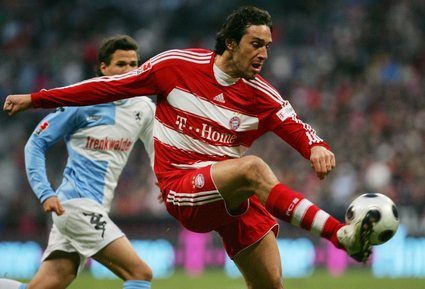 The big news in German football this week is that Bayern Munich striker Luca Toni has been named Sport Fashion Ambassador for Italy by the Italian Sporting Goods Manufacturers Association. In between ambassadorial duties, such as providing Ferrero Rocher to his team-mates, Toni found the net in a 1-1 friendly draw with Bayern’s city rivals and Allianz Arena co-tenants 1860 Munich.
The distinctly lacklustre performance has got Bayern fans anxious that they could be destined for a slow start back from their lengthy winter break.

Spare a thought for ironically-named Fortuna DÃ¼sseldorf and Albanian international Bekim Kastrati who very nearly erm… Kastrated himself in a collision with Bayern Munichâ€™s third-choice keeper, Bernd Dreher, during a recent friendly. The subsequent operation on his balls will keep him out of action for six weeks. As if that wasn’t enough irony to keep you going for know, Kastrati’s team-mate Olivier de Cock was on the scoresheet earlier in the game!