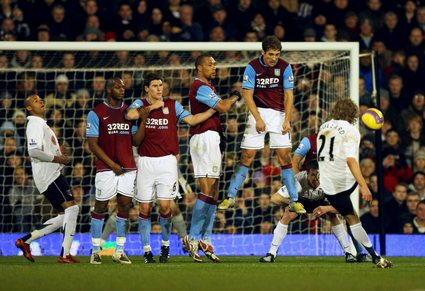 HEROES
Jimmy Bullard – Welcome back, Jimmy. The Fulham man marked his return from 16 months out injured with a match-winning free-kick against Aston Villa.
Emmanuel Adebayor – Two more goals for the man from Togo. His goalscorer’s instinct could prove to be decisive in the title race.
Jermain Defore – Made an excellent start to life at Portsmouth with a goal against Chelsea.
VILLAINS
Mark Clattenburg – The whistle-happy ref managed to book ten players in the Spurs-Man Utd game.
Alan Wiley – Oh no, it’s another ref! Wiley ruled out Andy Johnson’s goal four minutes from time in the Blackburn-Everton game for no apparent reason.
David Dunn – Should have been sent-off for a second bookable offence after a deliberate handball but was still on the pitch to clear Phil Jagielka’s header off the line.