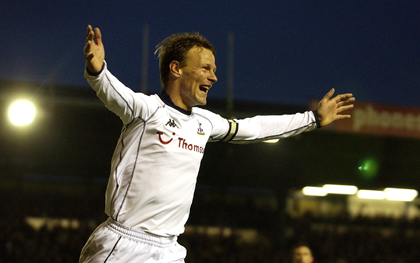 Ever-ready Teddy Sheringham has announced that he will retire from football at the end of this season – at the ripe old age of 42 years-old.
That’s a pretty impressive run for a career that started as a 16 year-old with Millwall and brought him 289 goals along the way as well as over 50 England caps. What Sheringham lacked in pace he made up for with one of the finest footballing brains of his generation, which also allowed him to play on for so many years.
He’ll see out his playing days with current club Colchester in the Championship but his lengthy career has seen him play for seven different English clubs, most notably Manchester United and Spurs.
But which one will he be most associated with after he retires?

Sheringham moved from Nottingham Forest to Spurs in the 1992-93 season and became the Premier League’s top scorer that year. He later became part of Spurs’ Famous Five forwards and was cited by Jurgen Klinsmann as the most intelligent strike partner he ever played with. He was hugely popular with the Spurs fans but by 1997 he hadn’t won anything with the club at the age of 31.
That prompted a move to Man United as Eric Cantona’s replacement but, much to Spurs fan’s delight, he failed to win any silverware in his first season. However, the terrace chants of him ‘winning f*ck all’ were soon silenced when he scored in both the FA Cup and Champions League finals to win United the Treble in the 1999 season. He followed that up with another Premier League title the following season and was United’s top scorer in 2000-01 when he was also voted Player of the Year by both the press and players.
But, the arrival of Ruud Van Nistelrooy saw Sheringham move back to his former club Spurs at the end of his season. He scored 26 goals in 80 appearances during his second stint at the club and helped Spurs reach the League Cup final, although they lost to Blackburn.
So, now that Teddy’s time is coming to an end will he be remembered for being a cult hero at Spurs or for the trophies he won at United?