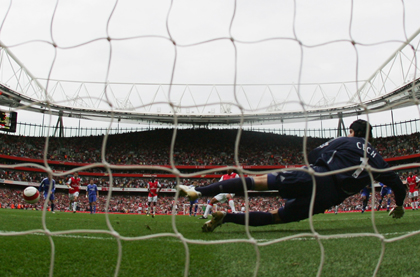 With only around ten games to go, it’s safe to say which players have been a success in the Premier League this season – so we’ve decided to assemble a first XI of the best performing players as chosen by ‘Pies readers.
We start in between the sticks with those eccentric loners who claim to be a different breed from their outfield teammates – the goalkeepers. They might not normally get the recognition they deserve but preventing a goal can be as important as scoring one at the other end.
Unsurprsingly, the Big Four’s keepers have kept the most clean sheets but there have also been impressive displays from the likes of Everton’s Tim Howard and Blackburn’s Brad Friedel. And, despite an apparent lack of English goalkeeping talent, players like David James, Scott Carson, Robert Green and the young Joe Hart have all done well for their clubs – although we presume Paul Robinson won’t be featuring in too many people’s minds.
Click through to vote for your Premier League goalkeeper of the season.