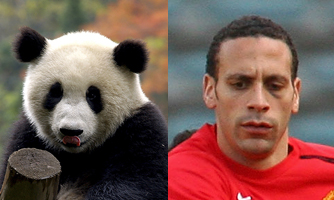 Man United’s Rio Ferdinand was sporting what looked like an impressive pair of shiners during the game against Roma last night – apparently they were caused by a knock against Villa at the weekend.
The look resembles London Zoo’s most famous Panda bear, Chi Chi – and they say ball playing defenders are an endangered species too.