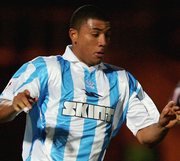 When I heard Colin Kazim-Richards was moving to Fenerbahce last summer I expected him to return to England within a matter of months with his tail between his legs to join a lower league English club. But no, the man who was once bought by Brighton with money won in a Coca Cola competition is now a fully-fledged Turkish international and Champions League goalscorer.
The man the Turks know as Kazim Kazim scored his second Champions League goal against Chelsea last night. The 21-year-old never really made his mark in the Premier League with Sheffield United, but it is good to see a young English-born player having an impact overseas. Did you ever think the Coca Cola Kid was Champions League material?