Without Zidane, can they escape the Group of Death? 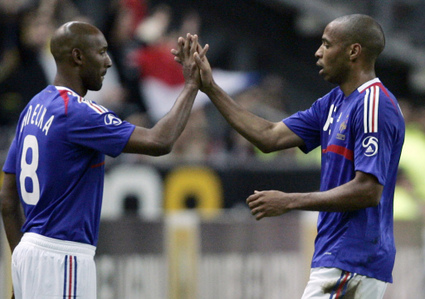 FRANCE (Group C)
Group mates Romania (9 June, Zurich), Netherlands (13 June, Bern), Italy (17 June, Zurich)
Three most valuable players 1) Franck Ribery A revelation for Bayern this season, and will be expected to take over from Zinedine Zidane as France’s creator-in-chief. Potentially the star of the tournament. 2) Karim Benzema The hottest young striker in Europe; I just hope Raymond Domenech chooses to start with him. 3) William Gallas After such an anticlimactic league campaign with Arsenal, Gallas will be hungry for silverware in this tournament. He’s still a class act, and forms a strong central defensive partnership with the ageless Lilian Thuram.
Hard fact France’s health system is ranked first in the world by the World Health Organisation.

What the media say “As the tournament progresses France should evolve. Their strength in depth means they are perhaps better equipped than any other team to recover from a bad start. Even if their last group game is against Italy.” [Guardian Unlimited]
What the bookies say Fifth favourites with most bookies, behind Germany, Spain, Italy and Portugal. You can get them at 17/2, which I think is decent value for a squad containing the likes of Ribery, Vieira, Gallas, Anelka, Henry and Benzema.
Pies predicts Yes, they have a very tough group, but I’m confident they’ll get out of it. After that, anything is possible. If Ribery fires, they will be very hard to stop – and they have several players with big reputations who have something to prove, not least Henry. I think they’ll make the last four, but go no further. Semi finalists
Shit Lookalikes Chris Powell and Claude Makelele