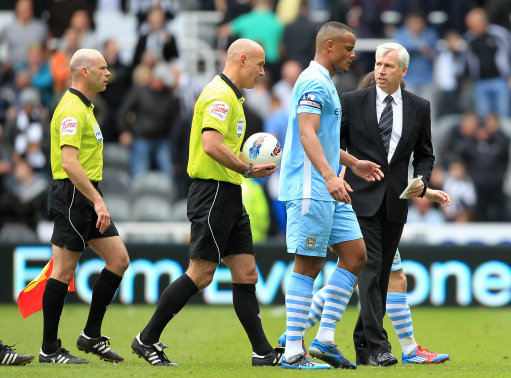 With the season all but over, the Premier League have named Newcastle boss Alan Pardew as their ‘Manager of the Season’ while Manchester City defender Vincent Kompany has picked up the prize for ‘Player of the Season’.

Pardew, once a fierce critic of teams who fielded too many foreign players, has recently embraced all things French and African, with the likes of Papiss Demba Cissé, Demba Ba, Yohan Cabaye and Hatem Ben Arfa inspiring the Magpies to the cusp of Champions League qualification.

Belgian international Kompany has been outstanding for the Citizens this season. An intelligent man off the pitch, he has been inspirational on the field of play and thoroughly desrves the award.

Indeed, both Kompany and Pardew are totally deserving of the prizes. Arguably, Robin van Persie or indeed Kompany’s team-mate Yaya Touré could also have won the player prize, but all in all, it’s a pretty fair outcome, no?