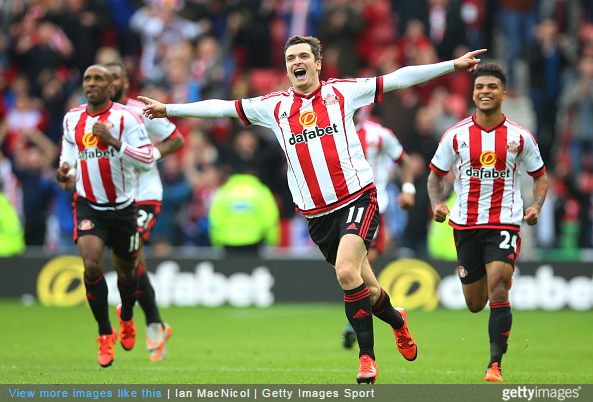 When Adam Johnson scored for Sunderland in the Tyne-Wear derby on Sunday afternoon, the winger made a point of sprinting the entire length of the pitch to celebrate in front of the Newcastle fans, who had been goading him throughout the game for reasons of which we’re sure you’re aware.

However, a few folks on Twitter took Johnson’s arms-splayed celebration as a direct reference to the Malaysia Airlines plane that was shot down over Ukraine last year, killing two Newcastle fans as well as all other 281 passengers and 15 crew members on board.

Even stranger still was the Daily Telegraph’s decision to give credence to these ridiculous claims by including them in the online version of their match report.

Some claimed the former England international was making a spiteful and provocative reference to the two Newcastle supporters who died when a Malaysia Airlines Flight was shot down over Ukraine last year.

Johnson should apologise for any offence caused, even if was not intended as it was perceived.

Thankfully, after finally coming to their senses almost 24 hours later, The Telegraph have since amended their match report to include an apologetic opening paragraph, which reads as follows:

In an earlier version of this report, we included the accusation that Adam Johnson had goaded Newcastle’s supporters with an aeroplane celebration after he scored his goal, which we suggested was a reference to the two Newcastle supporters who died when on the crashed Malaysia Airlines flight over Ukraine, last year.

We now accept that there was absolutely nothing in the goal celebration which could be sensibly taken to have been a reference to these tragic deaths.

We apologise unreservedly to Mr Johnson and have agreed to pay a sum of damages to the Sir Bobby Robson Foundation.

The whole thing beggars belief, but at least The Telegraph have made humble and sincere reparations – which is a darn sight more than can be said for the cretins that barfed forth the weird, insular accusations in the first instance.

What is the world coming to, eh?