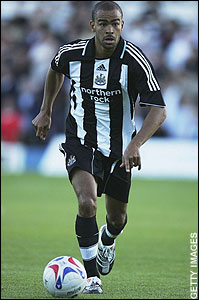 Newcastle gaffer Sam Allardyce has revealed that Kieron Dyer’s move to West Ham collapsed after the Hammers refused to pay an “escalated” fee of Â£8m. You read that correctly. EIGHT. MILLION. QUID. Apparently, The Magpies had accepted a bid of Â£6m but increased the amount they wanted to Â£8m.
Dyer had agreed personal terms and passed a medical at the London club but West Ham boss Alan Curbishley said on Saturday that the deal “was pulled at the 11th hour by Newcastle and there’s not much we can do about that”. This last minute re-evaluation of Dyer angered Curbishley, who said on Saturday that the transfer was “definitely off”. On form, Dyer is a fine player, but for me, his attitude leaves much to be desired. Taking on Dyer has its own drawbacks… namely squad morale. Teaming up with his old sparring partner Lee Bowyer would also carry its own risks.

Of the turnaround, Allardyce stated “Will it be difficult for Kieron? It’s life, isn’t it? He has got a contract. You sign it. The length of the contract means you are employed by an employer, something happens, it doesn’t work, you come back and get on with it.” Fair words from the former Bolton manager, but will Dyer give 100% effort to a club that clearly want to offload him?
West Ham are the only club I can see signing him. They’re throwing their money around wildly at the moment and I can’t see anyone else willing to spend Â£6million+ on Dyer. He is a gamble for any manager to take on. Allardyce is probably the best manager in the country at getting the most out of ‘troubled’ players, but there will surely be a rift between him and the England midfielder.
What are your thoughts on the matter? Is Dyer over valued? Can he still cut it at Newcastle or will he find himself becoming a fringe player at St James’ Park?