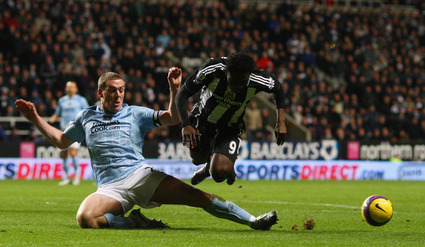 Sam Allardyce is probably one more home defeat away from losing his job as Newcastle manager. After his side’s 2-0 defeat to Man City at St James’ Park last night, a beleaguered Allardyce said: ‘A team like Newcastle should not lose three on a trot and it is a low moment.’
(No team is immune from three straight defeats, particularly not a Newcastle team that is blatantly low on confidence.)
However, I think Newcastle have no choice but to stick with Allardyce, not least because it would cost them several lorry loads of pay-off cash to sack him. Give Sam the rest of the season to see what he can do â€“ there are at least three worse teams than Newcastle in the Premier League, so there’s virtually no chance that they will go down. If Allardyce can bring in some new blood this month, and ditch some of the players who don’t want to play for him, then there is still hope that Newcastle can salvage their season.

Newcastle are the past masters of the panic sacking, but a glance at the most successful teams in Prem history (Man Utd and Arsenal) tells you that stability and patience is absolutely vital. Had Alex Ferguson or Arsene Wenger been manager at St James’, then both may well have lost their job after less than one season. The Newcastle board has to hold its nerve. Sacking Allardyce would achieve nothing.
Newcastle played quite well last night but they were deservedly beaten by a Man City side that played an intelligent counter-attacking game and took its chances very well. There’s no shame in that â€“ City are having a fine season and although their away record has been poor, on current form Newcastle fans might have seen this result coming.
Newcastle 0-2 Man City: watch the goals