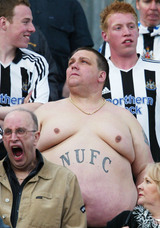 Well, Newcastle fans, you got what you wanted. Happy now? You effectively forced Sam Allardyce out of your club, without ever giving him a decent chance to show what he could do (as your Mackem rivals have generously done to Roy Keane, who has kept his job despite a string of dismal results). Another fine mess.
It seems to me that the vast majority of the Toon Army made up their minds about Allardyce before he had even taken charge of his first game â€“ they didn’t want a ‘long-ball merchant’ tainting the good name of Newcastle. His face didn’t fit either.
That said, I don’t believe that all Newcastle fans are living in the past or want to play a suicidal, ‘attack-at-all-costs’ brand of football (see K. Keegan) â€“ I believe they want to be entertained (who doesn’t?), but more than that they simply want success. Allardyce could have offered that, given time, but now it’s back to square one, with a self-inflicted bullet wound in each foot.
Newcastle are a big club in terms of support, but one look at their trophy cabinet tells me all I need to know about their real status.