I thought this would be more enjoyable 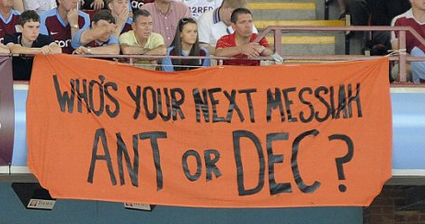 Like many neutral fans, I really wanted Newcastle to go down – because I knew it would be very enjoyable to see such a “massive” (translation: deluded) club drop down to the Championship, where they would face ingnominious, reality-check trips to outposts like Doncaster, Plymouth and Swansea. And for Newcastle to be taken down by a playing legend-turned-Messiah… well, it doesn’t get any better than that.
Or so I thought. Actually, I didn’t enjoy Newcastle’s relegation at all. The graceless behaviour of Phil Brown (what a tool!), after Hull were schooled at home by Man Utd’s youth team, brought into focus an obvious fact: Newcastle, for all their faults, are ten times the club Hull will ever be. Quite how Brown had the gall to grab a microphone and lead chants of “We are staying up, we are staying up!” is beyond my comprehension. His team won one game in their last 20 and narrowly avoided relegation -Â so how about a bit of dignity, Phil?

In the end, it was Alan Shearer who showed all the dignity, and in defeat. Whatever you think of his grey personality or punditry skills, he genuinely loves Newcastle United, and I’m sure it cuts to the bone that he goes into the history books as the manager who took Newcastle down. It was naive and perhaps egotistical for such an inexperienced coach to take on the job of keeping Newcastle in the Premier League, but I’ve been quite impressed by the way Shearer has conducted himself.
It’s not his fault anyway. As Shearer said in his post-match interview with Match of the Day, Newcastle’s relegation is the result of several years’ worth of bad decisions by the club’s management. The players Shearer had to work with were not good enough, simple as that. What now? I hope Shearer decides to stay on: the Championship is the ideal crucible in which he can develop his managerial skills. But first, the club need to get rid of most of their overpaid mercenaries, men like Geremi who earn around Â£50,000 a week (What. The. F**k!) – yep, it’s staggering how badly the club has been run. Two words: Dennis Wise. Two more words: Joe Kinnear. 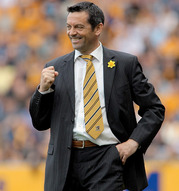 In the case of Hull City, for as long as the repulsive, Bluetoothed Brown is at the helm (come on, remember that ridiculous team talk out on the pitch? What a dickface), I wish them nothing but painful defeats and relegation next season. Or, as some people are saying this morning: shit club, shit fans.
Damn, I really hoped Newcastle’s misery would give me a warm glow inside, but I will kinda miss them. The Premier League will certainly be a less interesting division without them.