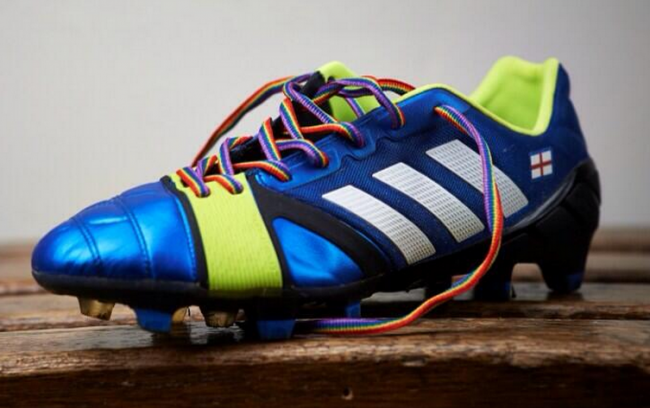 The gay rights group backing the ‘rainbow boot lace‘ campaign which is due to take place across all English and Scottish league football games have withdrawn their backing due to the “sexualised innuendo” of the chosen campaign slogan.

The ‘Football v Homophobia’ group were appalled by dual organisers Stonewall and Paddy Power’s decision to run with the slogan “Right Behind Gay Footballers”, which, you’d have to agree, is a little on the “nudge, nudge, wink, wink” side. In your endo ;-)

“Our discomfort is with the reliance on sexualised innuendo and stereotypes about gay men.

“We feel it is incongruous to run a campaign aiming to change football culture whilst using language which reinforces the very stereotypes and caricatures that, in the long term, ensure that homophobia persists.”

Stonewall, themselves an anti-homophobia charity have stood by their choice of slogan, arguing that the campaign has been very popular with several high-profile clubs confirming that their players are happy to wear the rainbow-coloured boot laces this weekend to show their support.

A spokesman for Stonewall said:

“We teamed up with Paddy Power for this campaign precisely because they talked the language of players and fans (read: #BAAAAAAAAAAAAAANTZ!!!!).

“The slogan is risque and tongue in cheek but we are proud that it is engaging with fans and players and that they are taking a positive stand.

“The entire campaign has been overwhelmingly positively received and we have been extremely pleased with the response.

“Players and fans are getting the message that homophobic abuse is unacceptable.”

Well, we must admit we thought the slogan was just a tad insensitive on first viewing, but it’s obvious that it wasn’t intended to be anything more than humourous rather than being lewd and/or provocative.

Hopefully this doesn’t derail what is ostensibly shaping up to be a worthwhile undertaking.