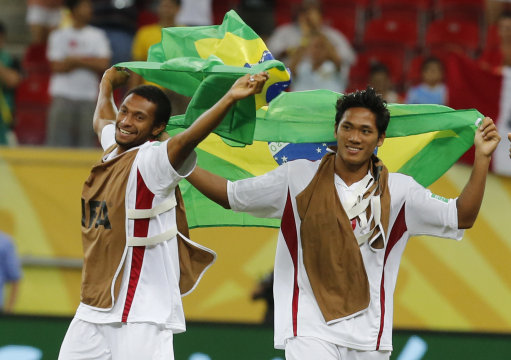 Not so very long ago the footballing world fell head over heels in love with the Tahitian national side when they played like troopers at the Confederations Cup in Brazil; mushing up collective hearts into pulp as they handed out pre-game shell necklaces to their opponents and beamed their way to three considerable thrashings at the hands of the hosts, Uruguay and Spain – conceding a hefty 24 goals (though they did manage one consolation goal) in the process.

Still, Tahiti bowed out smiling, though this may have been due to the fact that they actually thought they were going home with three points in the bag, thus finishing level with Nigeria in third place in Group A.

For you see, the Tahitian FA have implemented a points structure for domestic league games, thus making it the only top division in the world to award points to the losing side.

Contested by 11 teams, the Tahitian Super Ligue Mana offers four points for a win, two for a draw and one for a defeat and, while the league has actually operated on this basis since 2005/06, it is only now coming to world’s attention after Tahiti FA director Charles Ariitoma explained the logic behind the system to ESPN Brazil a day or three ago.

“We just don’t want anyone to be sad. With this system, even if a team loses every game, they won’t be on zero points at the end of the season. Football, first of all is joy.

“Since we adopted the new system, the games have gained more intensity. This has improved our football and also our national team.”

Apparently the only way a team can end the day with zero points in the bag is if they don’t turn up.