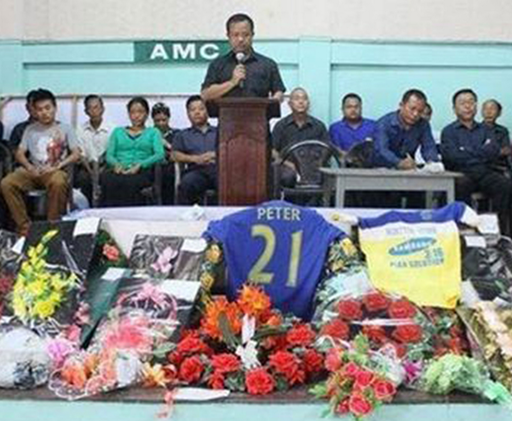 An Indian footballer by the name of Peter Biaksangzuala has died in hospital several days after a botched goal celebration left him with a damaged spinal cord.

Biaksangzuala suffered his injuries after scoring for his team, Bethlemhem Vengthlang, in the 62nd minute of their Mizoram league tie against opponents Chanmari West on Tuesday.

The midfielder, who was only 23, then attempted a somersault in celebration and landed awkwardly on his neck.

“Team-mates immediately rushed to his side, knowing something was wrong, signalling for training staff to help him.

“Biaksangzuala was then rushed to a nearby hospital, Aizawl Civil Hospital, where a CT scan is reported to have damaged his spinal cord.

“He was then moved to an intensive care unit but did not recover.”

His last rites were performed yesterday in Khawzawl, Biaksangzuala’s home town, with flowers and condolences flooding in from fans and mourners across the region.

“This is indeed very shocking for all of us,” said Lalnghinglova Hmar, secretary for the Mizoram Football Association.