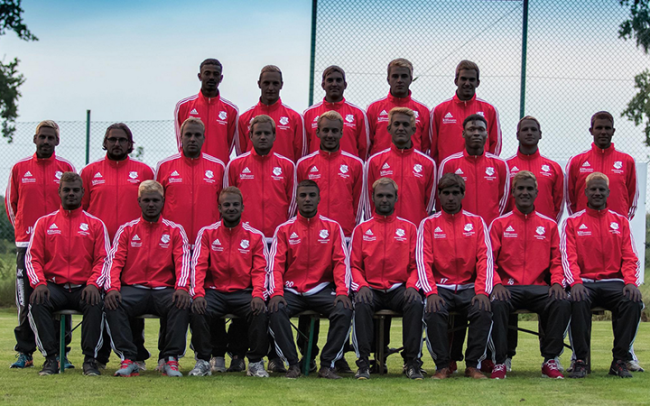 A team from the lower reaches of German football has posed for a ‘blacked-up’ team photo as a show of solidarity for two of their players who were reportedly subjected to “racial attacks” over Easter weekend.

Deinster SV, who play in the Kreisliga, digitally altered their team photo to make the entire squad appear black after two of their players, both Sudanese refugees, were abused both physically and verbally during the match, according to coach Soenke Kreichich.

The caption that accompanies the photo fills us in further:

Our friend and fellow player Emad was insulted and beaten on Saturday on racial grounds. This is just sad!

Violence against refugees is pathetic!

Emad and Amar – you belong to us. We are pleased that you are with us!!!

Coach Kreirich was similarly defiant while explaining the photo:

We wanted to make a stand amongst ourselves, but also to the public.

It should make it clear that Emad and Amar are an inherent part of our team, and not a minority on which you can use violence to let off your personal frustration.

The post currently has over 18,000 likes on Facebook, though the general social media reaction has been decidedly mixed, with many questioning the use of black face – regardless of the genuine underlying sentiment – to protest against anything in this day and age.