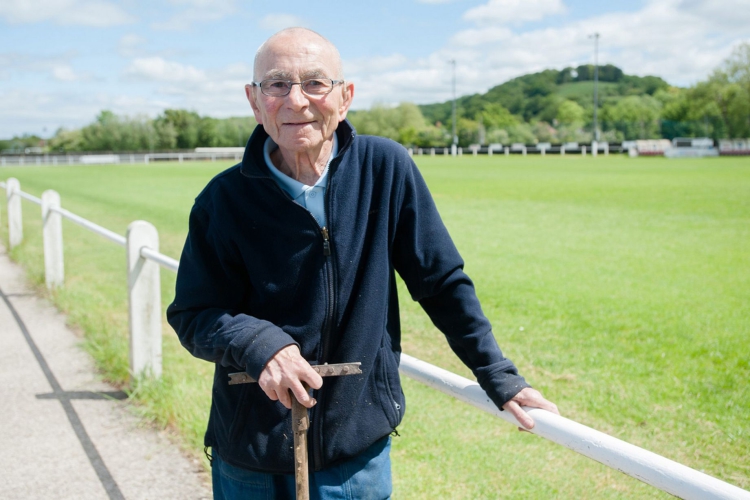 The man you see before you is British football’s oldest groundsman, 76-year-old Terry Henderson, who has offered to hand over his entire life savings in a desperate bid to prevent his beloved football team, Hallen FC, from going to the wall.

Terry lives in a mobile home next to Hallen’s pitch and has spent the last 40 years tending the turf and keeping the ground ship-shape. However, it looks like his 40th year of loyal service – the club’s 66th year in existence – may be their last due to the local parish council suddenly hiking the club’s pitch rent up by 40%.

Terry, along with his late wife Eileen who passed away last year, were the original key-holders when Hallen moved to their Moorhouse Lane ground four decades ago. His grandson now plays for the team.

“I have many fond memories here at the club and would be devastated if it were to fold. It really means the world to me.”

As such, Terry offered to donate all £20,000 of his life savings to help keep Hallen afloat for another year while a permanent solution was found – an offer the club have respectfully declined.

“This is an extremely generous offer and we are very grateful,” said Francis Fairman, vice-chairman of the Hallen FC committee.

“However, we cannot accept this donation as we need to be sustainable and think about the future of the club, not just in a year’s time.

“Terry has been a fantastic support and we’re very grateful. We know how much this club means to him.”

While the council themselves have assured Hallen that they aren’t going to be evicted while both parties try to find a suitable financial solution, the club claim that they will have to forfeit their playing facilities as of May 31st. After that they will have no choice but to fold.

That said, in the meantime Hallen are petitioning the council – whom they claim are sitting on coffers of £1.8million – to re-evaluate their options, as shutting down the club would mean losing a “very important part of the community”.

Best of luck to them. Should you feel compelled to do so, you can sign the petition here.