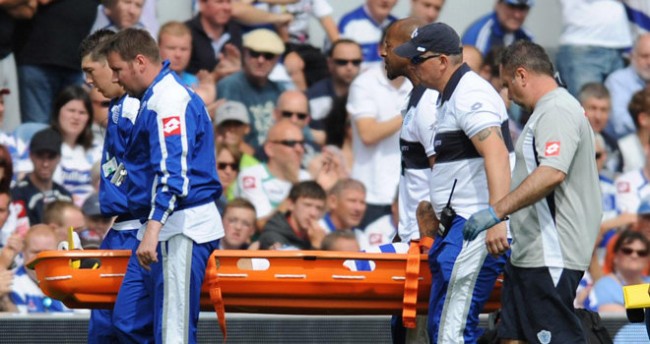 A gifted and athletic footballer, Kieron Dyer has seen his career harangued and harrassed by a seemingly never-ending procession of injuries, the latest of which has knocked his 2011/12 campaign on the head.

The Queens Park Rangers midfielder had picked up a knock in the opening game of this season, but was in line to make a return to first-team football after Christmas. However, whilst getting a run-out in a reserve game against Tottenham, he injured his foot and now needs surgery which is likely to keep him out of action until next season.

“This is a devastating blow for Kieron, ” said Rangers’ boss Neil Warnock. “I have never met a more determined pro in my career, and he really doesn’t deserve this.”

“The specialist said he thought Kieron could return before Christmas without the need for an operation and is disappointed that this is not the case, and he has no alternative now but to operate.”

However, Warnock is confident his unlucky midfielder can overcome his latest setback.

“I have absolutely no doubt that he will recover after the operation, ” explained Warnock. “We are going to support him as best we can because he has got such a contribution to make, both on and off the field.”

“And even though he has not featured for us, he has made a vital contribution at the training ground and has been very important to have around the place.”

Whatever team you support, you’d need to be a right heartless so and so not to want  Dyer to finally get a decent chance to do what he does best – playing football.