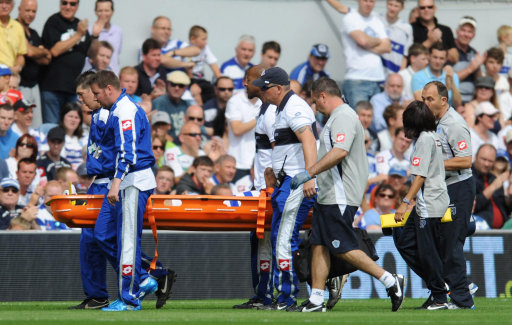 He might not be the most likeable footballer around, but even the most hard-hearted of you is sure to feel some sympathy for the plight of QPR’s Kieron Dyer.

The former England man has seen his career shredded by a catalogue of serious injuries, the latest of which has scuppered his chances of getting a regular game at Loftus Road.

Dyer only lasted six minutes of his Rangers’ debut in August after damaging his ankle but it was initially thought that the injury would be a relatively minor one. However. now it has been revealed that the midfielder has suffered a relapse as well as picking up a new ligament injury.

Manager Neil Warnock said: “It’s not looking good for Kieron and it looks as if he will need a lengthy rehab. There seems to be a new ligament problem at the front of his foot, and he has been in a lot of pain. I feel for the lad, especially after the training and effort he’s made to get back.”

Will the former Newcastle United man ever string a meaningful number of games together again?