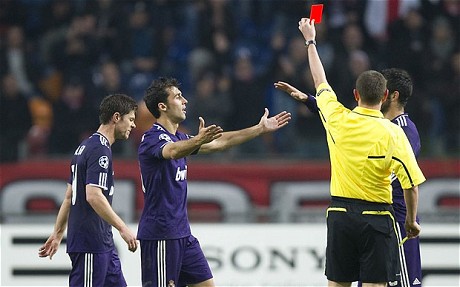 With their passage to the next round of the Champions League already assured, Real Madrid’s second(ish) string ran out as 4-0 winners over Ajax last night thanks to goals from Karim Benzema, Alvaro Arbeloa and a second-half double from Cristiano Ronaldo.

However, directly after the game, Jose Mourinho was made to refute claims of ‘gamesmanship’ after both Sergio Ramos and Xabi Alonso were shown convenient red cards in the dying stages – dismissals that will see both players go into the knockout stages with squeaky clean disciplinary records once they serve their one-match bans against Auxerre in the final group game.

Reports in the Spanish media were insinuating that Mourinho, nefarious chancer that he is, instructed Ramos and Alonso to pick up second bookings from the touchlines (which they duly did, for time-wasting no less), but the Portuguese coach reacted angrily to the accusations – blaming referee Craig Thomson for making pointless decisions all night:

“There is no use talking about the cards [Ramos and Alonso] received in the final phase. It would give you a fine story but I only want to talk about this 4-0 win, which is a fantastic result.

“The sendings-off came after an easy game where the referee has shown some strange yellows. They are cards that I don’t like.

“I don’t think it was necessary to get those red cards because we were in control, the match was already dead and when it’s three or four-nil there is no point in the referee showing those cards – the British referee has shown a card here and a card there.”

Ramos himself also later denied that Madrid were deliberately seeking the late cautions, telling AS:

“We haven’t gone looking for the cards. Seeing what the scoreline was, the referee could have spared them. But he sent me off and that’s it.”

You’ll forgive me if I don’t quite believe you Sergio. UEFA have now vowed to step in by launching an investigation into the allegations, so you can probably expect to hear the results around this time next year.