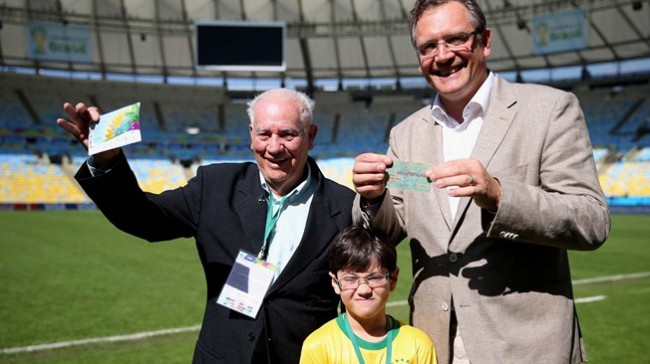 An 85-year-old Brazilian gentleman has traded in a mint condition, unused 1950 World Cup ticket in exchange for a seat at the 2014 Final in Rio de Janeiro.

Along with around 200,000 other fans, Brazil fan Joedir Belmont bought a ticket to attend the final deciding game (they didn’t have “finals” as such in those days) of the 1950 tournament at the Maracana, but had to skip the match to attend to his ill mother.

Uruguay went on to win the game, famously dubbed “The Maracanazo”, with winger Alcides Ghiggia scoring the winning goal in a surprise 2-1 victory.

Indeed, Uruguayan’s still refer to the “Phantom of the 50” in relation to the ominous fear that Brazilian fans still feel in the pits of their stomachs when their side are drawn against La Celeste.

Despite missing the infamous game, Senhor Belmont held on to his ticket as a reminder of Brazil’s darkest hour. 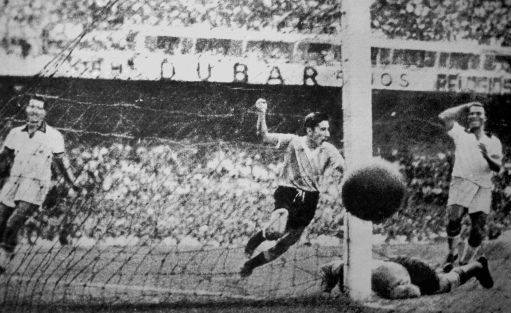 Uruguayan legend Ghiggia scores the World Cup-winning goal against Brazil at the Maracana, 1950

Fast-forward 64 years and Mr Belmont found himself drawing blanks in his efforts to buy tickets for the 2014 World Cup Final.

In a last-ditch desperate attempt to snag seats for him and his grandson, he wrote to FIFA and promised to donate his immaculate 1950 ticket to the FIFA museum in exchange for two tickets to this year’s final at the Maracana.

FIFA duly agreed to the swap and their general secretary, Jerome Valcke, met with Belmont recently to officially trade their tickets.

“A few months ago we received a letter from a Brazilian man who said he might be one of the only people to still have a match ticket from 1950,” Valcke told FIFA.com

“He knew that we were going to open a football museum. We said that we’d love to have it. And now, in return, we’ve given him tickets for this FIFA World Cup.”