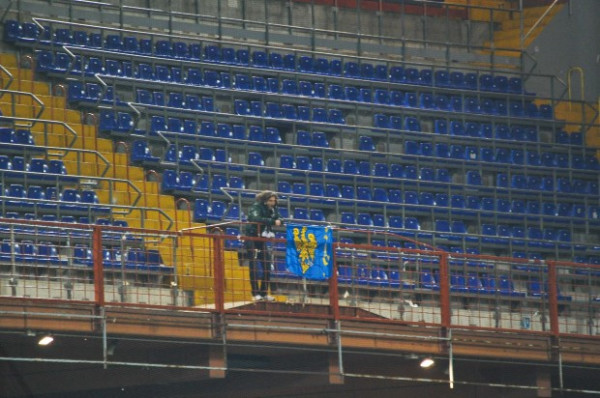 Here’s a little yarn to warm your cockles on this brisk Winter’s morn: The solitary Udinese fan who turned out to watch his side’s 0-2 victory over Sampdoria on Sunday evening has quite rightly become a minor celebrity in Italian football.

Apparently the fan, who goes by the name of Arrigo Brovedani, has told Sky Sports Italia that he didn’t expect to find many more Udinese fans in the away section of Sampdoria’s ground but was ‘stunned’ to find that he was the only supporter to have made the journey when he emerged out into the Stadio Luigi Ferraris.

Brovedani, a wine merchant by trade, himself told the Udine Today supporters’ site:

“I was in Genoa for a work meeting and usually take a trip round the area around this time of year, but it was pure coincidence Udinese were playing there at the same time. So I took advantage and organised a ticket.

“If I am in a city where Udinese happen to be playing, clients tend to send me free tickets, as they know my passion for the team. This time it wasn’t possible and I had to sort it out myself.

“It wasn’t easy, as I had to buy a ‘Fan Passport’ to buy a ticket for an away game and it takes 18 days to go through, so I wrote to Sampdoria in order to make sure it would be alright and they were very helpful.

“I made the journey to Genoa, arrived at the stadium and only then did I realise I was the only Udinese fan there! At that point the stewards asked if I wanted to sit in the main stand, but I insisted on going into the away end, seeing as I had paid for that ticket.

“I had the Udinese flag with me, as I carry it everywhere in my car. The Samp fans applauded me after we scored and they were really very kind.”

Brovedani also said that Udinese captain Antonio Di Natale had jokingly invited him down from the stands to warm-up for the game with the players after catching a lone “Forza Udinese” chant wafting down from on high.

He was also given coffee by stadium stewards, with the Sampdoria higher-ups also giving him a Sampdoria shirt for his efforts! It’s also being reported that a large group of Samp fans invited Brovedani for a drink with them after the game.

As for Brovedani’s own club; Udinese have formally dedicated the victory to their lone hero and have issued him with free admittance to watch their upcoming fixture against Palermo from the comfort and warmth of the directors’ box.