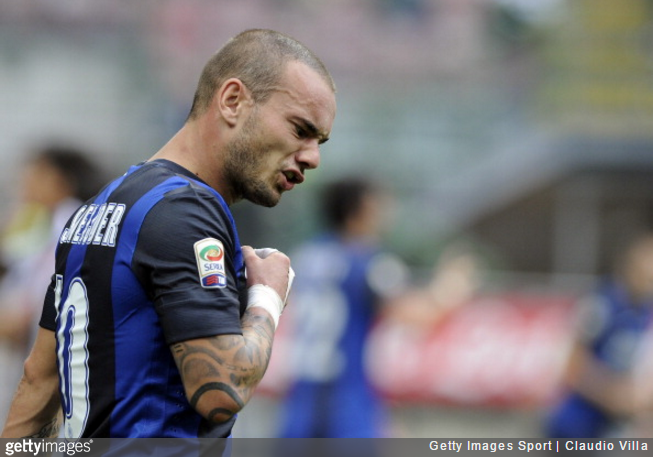 Having represented Inter Milan for four years, Wesley Sneijder has taken the risky tack of admitting that he’d rather have spent that time playing for AC Milan.

Speaking before Sunday’s Derby della Madonnina between the two great rivals, Sneijder – who made 76 appearances for Inter between 2009 and 2014 before leaving under a cloud – admitted that he only ever dreamed of playing for the Rossoneri as a boy.

At Inter I gave everything, I put my heart into it, but it didn’t finish well. I felt trampled.

Playing for Milan was my dream when I was a child. So yes, if I went back to Italy I would want to play for Milan.

I don’t think I will come back [to Inter]. I left after a dispute, and as I said I would like to play for Milan before finishing my career.

I am old but I can still play. I watch matches from the Italian League and I understand that it isn’t what it was five years ago.

There is less quality, but Milan is legendary for me.

Subtlety, thy name is Wesley Sneijder.

The ensuing derby – the 165th between to two great Milanese rivals – eventually ended 2-2 with Ivan Perisic nabbing a dramatic 92nd-minute equaliser for Inter.