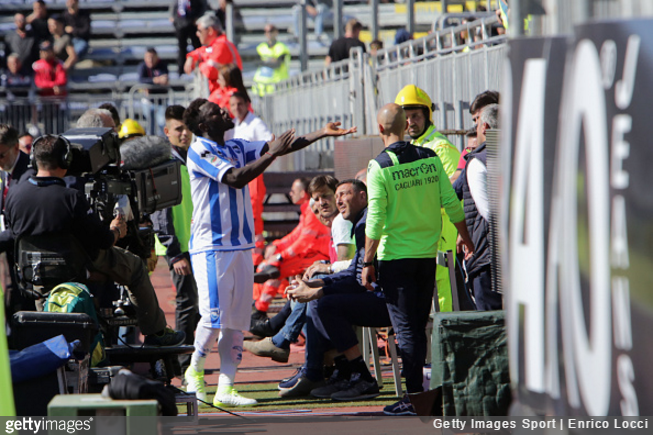 Pescara midfielder Sulley Muntari walked off the pitch in disgust after claiming to have been racially abused during the final minutes of Sunday’s Serie A game against Cagliari.

The 32-year-old Ghanaian was actually booked by the referee after attempting to report the abuse, prompting the former Portsmouth player to leave the pitch in protest in the 89th minute of Pescara’s 1-0 defeat.

According to BBC Sport, Muntari was officially cautioned for “dissent” after confronting Cagliari fans and subsequently requesting that referee Daniele Minelli stopped the match.

The referee should not just stay on the field and blow the whistle, he must do everything.

He should be aware of these things and set an example.

I asked him if he had heard the insults. I insisted that he must have the courage to stop the game.

He (Muntari) asked the referee to intervene, but he [said he had] neither heard nor seen anything.

Muntari was right, but he shouldn’t have left the pitch. It’s not up to us to dole out justice.

We can talk a lot about it but then it must be left with the powers that be.

Today this has happened when Muntari has already played in Italy for many years.

We hope that mentalities will change.