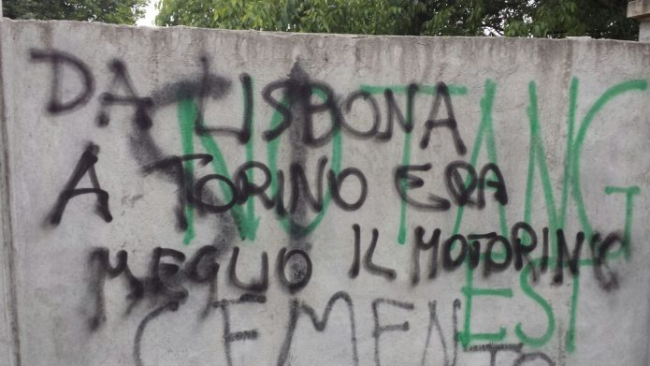 In truly appalling news, vandals – believed to be of the Juventus persuasion – have defaced the monument in Turin that stands in tribute to the ‘Grande Torino’ team that was killed in the Superga plane crash of 1949.

The tragic accident, which occurred while Torino were flying back from Lisbon after playing Benfica in a friendly, claimed the lives of every member of Torino’s famous post-war side.

Now every year on 4th May, the current Granata side walk up the hill to the monument that sits at the site of the crash in order to pay their respects.

However, on the eve of what will be the 68th anniversary of Superga, a series of offensive slogans and graffiti were discovered daubed on the road leading up to the memorial.

“From Lisbon to Torino, would have been better by moped,” reads one scrawled message.

According to Gazzetta dello Sport, a group of Torino fans arrived at the site after reading about the vandalism and painted over it with red paint to help cover it until the council are able to properly remove it.

You really have to wonder what goes through some peoples minds sometimes. Utterly imbecilic.

Torino and Juve are set to play against each other in the Turin derby this coming Saturday.

Hopefully there’ll be no equally moronic reprisal in the terraces.