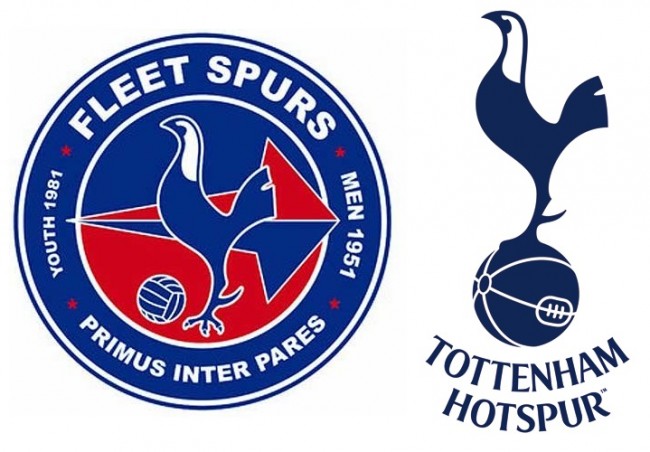 Tottenham’s legal department have been busy over the past few days, putting the kibosh on a non-league side using their club badge after deeming it too similar to their own.

Fleet Spurs currently play in the Wessex League Division One in Hampshire and were originally set up in 1948 by soldiers who had returned from World War II – though there are no official links between them and the Premier League club, who have now legally requested that they drop their cockerel crest.

“We haven’t got a penny to our name, we couldn’t afford to fight it. It’s been quite stressful, we just felt really intimidated by the heavy-handed approach, but I can see where they are coming from.”

Yes, it is a little bit copyright-infringementy isn’t it Bryan?

A spokesman for Tottenham made the club’s case to the BBC too:

“If we do not take action to stop Fleet Spurs using our cockerel logo, it can undermine our ability to stop other unauthorised people who use our logo for commercial purposes, such as counterfeiters.

“We are very conscious that Fleet Spurs is a grass-roots club. For this reason we have been very careful not to ask them to do anything that might incur costs.”

Apparently, Fleet Spurs have always featured the cockerel on their badge in homage to Tottenham, with the current design coming about as the result of a fan competition.

Chairman Sheppard has also insisted that the new design will also be drafted up by a supporter – although he admitted he would scrutinise the winning entry more carefully this time to avoid incurring the wrath of Tottenham again.

It is also estimated that changing the Fleet Spurs badge again would cost the club between £3,000 to £4,000, though Tottenham aren’t bullying them into changing it straight away – allowing the non-league side to wear their current badge on their kit for the rest of the season and giving them up until Christmas to remove any traces of the current crest from their home ground.