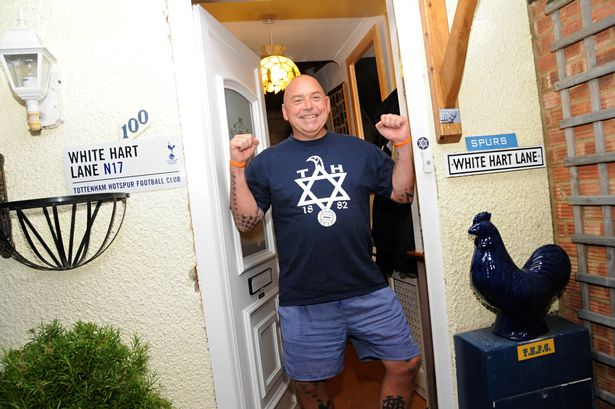 An ardent Tottenham fan for the last 40 years or so, Gary Lane (the man you see before you) has gone to great lengths in order to display his passion for his beloved football club.

With the obligatory club crest tattoos and blue cock letterbox already in place, 55-year-old Gary has shelled out the £100-odd to legally change his middle name by deed poll from “Mark” to “White Hart”.

You get the picture: “Arise, Mr Gary White Hart Lane.”

The self-employed hod carrier from Knaphill, Surrey, who regularly makes the 116-mile round trip to watch Spurs play at home, explained his decision to the Surrey Advertiser:

“I’d been going for so long and my surname was already Lane, and I like a bit of banter.

“I know a lot of people at Spurs, some of them with stalls up there – that’s what happens when you’ve been going for 40 years.

“When I tell people my full name on the phone they can crack up.

“But if it’s an Arsenal or Chelsea fan they can get the hump.

“When I told my mum I’d changed it, she nearly fell over.”

As well as the love of the bant, Gary also revealed that there is also an emotional reason behind his decision to re-name himself after Tottenham’s home ground, telling the paper that his name change was partly in tribute to his late son, Jake, who sadly died aged three without ever going with his old man to watch Spurs play at the Lane.