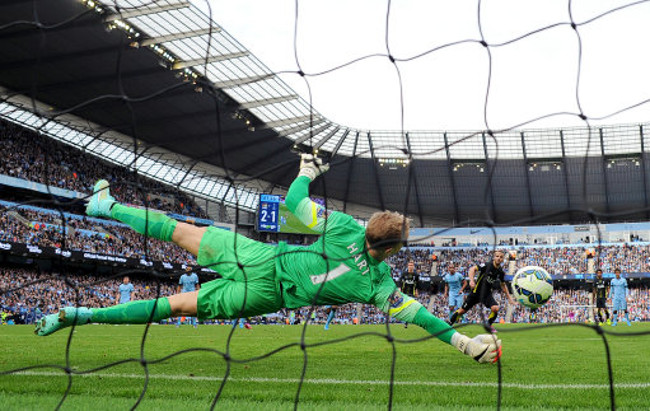 Spurs suffered a third consecutive spanking at the hands of Man City, with the Lilywhites going down to four goals all scored by Sergio Aguero. However, for long periods of the first-half, the visitors were well in this rather bizarre game of football.

An incredibly open first-half saw Sergio Aguero score on 13 minutes only for Christian Eriksen to level the scores soon after. Aguero then made it 2-1 from the penalty spot after Erik Lamela had fouled Frank Lampard in the box, although the contact was minimal.

Aguero then had a chance to net yet another penalty after Younes Kaboul had felled David Silva in the Spurs’ box. However, this time Hugo Lloris kept out the Argentine hitman’s effort.

After the break, the real turning point in the game came, with Joe Hart saving a weak Robert Soldado spot-kick which would have put the Lilywhites right back in the game. Instead, Aguero netted his third of the game courtesy of yet another pen after Federico Fazio saw red (somewhat harshly) for a last-man foul on the South American, who himself managed to beat Lloris this time to make it 3-1.

Down to 10 men, Mauricio Pochettino’s charges were up against it and eventually Aguero make it 4-1 courtesy of a fine finish. Not the best afternoon for the north Londoners who have now shipped a total of 15 goals in their last three games against the Citizens.