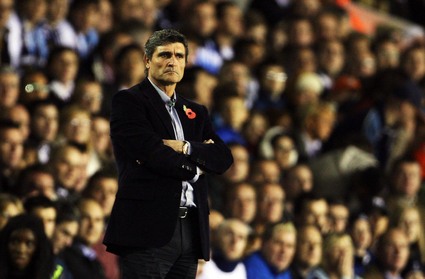 Juande Ramos’s first game in charge at the Lane ended with a fairly comfortable win, thanks to goals by in-form Robbie Keane and Pascal Chimbonda, although Blackpool gave the hosts a good game and should have equalised from close range through Gary Taylor-Fletcher. After the game, Ramos made the noises all Spurs fans want to hear. He said: ‘The most important thing was the winâ€¦ The team needs to improve in all areas, in attack and defence, but this is a team of great professionals and I hope it will improve quickly.’
I like the cut of Juande’s jib. He’s like a typically plain-speaking Yorkshireman, only from Spain. Blackpool boss Simon Grayson also seems to like the new Spurs manager, saying: ‘Full credit to Juande Ramos. He came to speak to me at the hotel.’