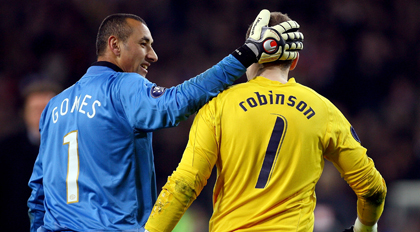 1. Juande Ramos’ monopoly on the UEFA Cup is finally over, but only just. The Spurs manager has won the competition for the last two years with former club Sevilla and it took a penalty shoot out to prevent a possible hat trick.
2. Dimitar Berbatov scored one of the best goals of his career with a stunning volley after 80mins that sent the game into extra time against all odds – will Spurs still be able to keep hold of him next season?
3. Jermaine Jenas could have won the game with the last penalty after Paul Robinson had saved PSV’s second attempt – why would you leave the most important spot kick to an Englishman?
4. Pascale Chimbonda never looked like scoring when he stepped up to the spot – were his thoughts still on which club he would be playing for next season?
5. Despite the loss, Spurs can take credit for clawing their way back into the tie and making brave substations towards the end – Anyone still remember Martin Jol?