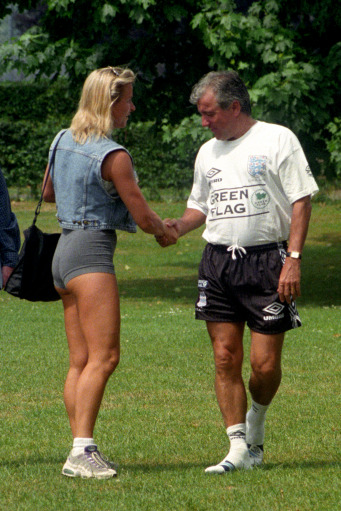 Out of the clear blue yonder, former England and Barcelona honcho Terry Venables has made an unexpected return to football management (his first managerial job since providing assistance for England manager Steve McClaren back in 2007) today, formally taking over as the new technical advisor – ‘coach’ in proper, non-ridiculous words – at Wembley.

Wembley FC that is – the non-league outfit that are currently plying their trade in the Combined Counties League, the ninth-tier of English football, and attract an average of less than 100 spectators to their home games.

“Managing, coaching and teaching football has been an essential part of my life for over 30 years. This opportunity to share my knowledge of decades with an eager group of players and coaches was too important to turn down.

“If they are willing to learn, I am willing to teach. Grassroots football is essential for the lifeblood of the professional game and if I can leave Wembley FC in a better position than I found it then it will be a job well done. It is early days but the signs are encouraging.”

Presumably solely due to the name, the club (originally founded in 1946) have recently signed a new sponsorship deal with official FA-Cup partners Budweiser and have now managed to rope in Tel as their coach in return for a 24-bottle crate of Bud every week*.

(*this is probably not true)

If it’s got the whiff of a PR stunt about it, that’s because it’s a massive whopping sod-off PR stunt! Still, better him be back involved in management than foisting any more of his god-awful singing on us all.

Fun fact: Wembley FC’s only other previous claim to fame is that their home ground, Vale Farm, was comandeered by England’s 1966 World Cup squad and pressed into use as their training base.