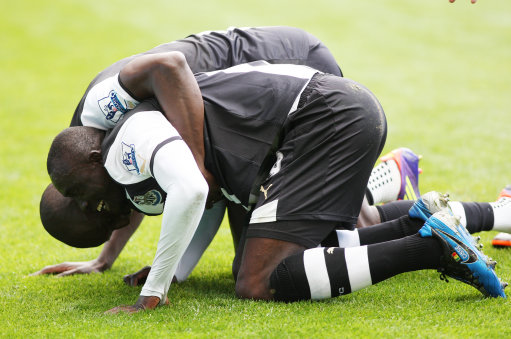 There’s a theory being put forward in some quarters (it was mostly flippantly pointed out on Twitter when the deal was announced) that Newcastle may lose devout Muslim quartet Demba Ba, Papiss Cisse, Cheick Tiote and Hatem Ben Arfa after signing a shirt sponsorship deal that may just infringe Sharia law.

Newcastle announced yesterday that the club have concluded a £multi-million deal with payday loan company Wonga, though there have been suggestions that Ba, Cisse, Tiote and Ben Arfa may be averse to wearing the logo of a company that profit from money lending – a practice prohibited by Sharia law (for example, interest is not paid on Islamic bank accounts or added to mortgages on Islamic households) – and may even boycott the club as a result.

The assistant secretary general of the British Muslim Council, Shaykh Ibrahim Mogra, has been canvassed for his opinion, telling the Independent:

“There are two aspects to this. We have the rulings of the religious law and we have the individual’s choice and decision on how they want to follow or not follow that rule.

“The idea is to protect the vulnerable and the needy from exploitation by the rich and powerful. When they are lending and are charging large amounts of interest, it means the poor will have short-term benefit from the loan but long-term difficulty in paying it back because the rate of interest is not something they can keep up with.

“The Islamic system is based on a non-interest-based system of transaction.”

Practicing Muslim Freddie Kanoute took a stand at Seville and refused to carry the logo of betting firm 888.com on his shirt. Kanoute was allowed to wear a blank shirt during games, but agreed to wearing the logo during training sessions as Allah was apparently okay with that.

Anyway, it is a possible solution that Mogra is backing:

“Freddie was allowed to wear a top without the 888.com and that is a reasonable request to be made by the player.

“Assuming all four are on the pitch at the same time, if you have seven out of 11 (with advertising on their shirts) you have sufficient coverage. It is not asking too much, I believe.”

You may have noticed that none of Newcastle’s Muslim players have actually been consulted yet, and that all of the outrage is being conducted on their behalves. Hey ho.

Will Newcastle lose Demba Ba, Papiss Cisse, Cheick Tiote and Hatem Ben Arfa over their Wonga shirt deal? No, probably not. Will they have to get four blank shirts printed up? Possibly.