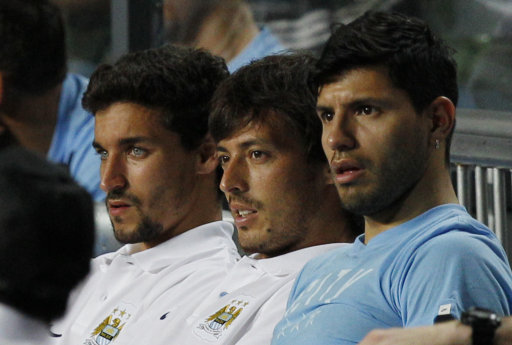 “You like the look of these pretty boys? Take your pick”

Independiente have hit the skids somewhat of late, having been relegated from the Argentinian top tier for the first time in the club’s 108-year history – a humiliating descent into the lower leagues that saw the more hardcore fringe of Independiente ultras group storming a “clear the air” meeting held by club president Javier Cantero not so long ago in order to pelt him with chairs, tables and shoes.

Anyway, in a bid to help out his stricken former side (who conspired to lose their first match in Primera Nacional B to lowly Club Atletico Brown on Saturday), ex-Rojo striker Sergio Aguero apparently offered to bankroll the signing of five new players to help fill out the wafer-thin squad – though Independiente are yet to take him up on his generous offer due to their top brass being a bunch of useless, lily-livered chumps.

According to the Manchester City forward’s father Leonel, his son – who joined the club as a nine-year-old in 1997 – offered to stump up the cash to bring in a clutch of new faces, but no-one at Independiente got back to him:

“Sergio offered to buy five players and take over their salaries. We asked (Independiente assistant manager) Carlos Squeo for a list of players but we don’t know anything because no one called – not Squeo, not (head coach, Miguel Angel) Brindisi.

“There’s no leadership. I feel there is a slight against Sergio”