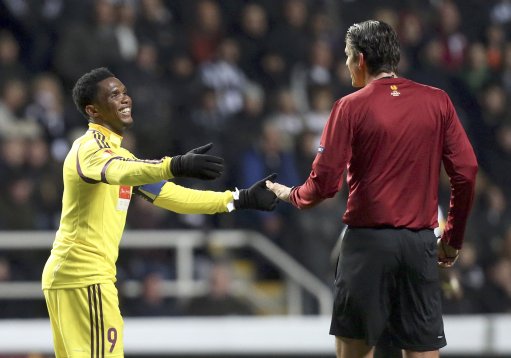 It’s fairly common knowledge in footballing circles that Samuel Eto’o is a bit of a self-centred dick with a long history of falling out with anybody and everybody who has refused to hold him in as high stead as he holds himself, though it’s fairly rare that his former colleagues have openly warned against his toxic ego.

In an interview with Brazilian newspaper Globo, Carlos (who is now sporting director at Sivasspor in Turkey) explained the detrimental effect that Eto’o’s gargantuan self-importance had on the Anzhi squad:

“I’ve known Eto’o since I was 16, and from that time on he’s always been a good guy who I’ve liked a lot. He’s a good person, but there a part of him that thinks ‘I, and not the group’, which is really damaging.

“When a footballer, instead of playing, is interested in signing players who are his friends…it’s confusing and strange. He did everything at Anzhi, except play football.”

“I came to the club and in my first year we finished in the top five. We managed to professionalise the team. In the second year, we signed Eto’o and I had control of the team – I organised the players and worked with the coach. I put Anzhi among the best.

“With the arrival of Eto’o, with the values of everyone involved, I had some little problems in the dressing room and had to talk to the Russian players and explain why Eto’o was there.

“However, a moment arrived when Eto’o thought to interfere with my work, to control the club, taking my position and that of Guus [Hiddink, Anzhi’s then-coach].

“We talked about one thing, and then he went to the players and talked about another. That stressed me out and I warned that I would pack my bags and go.

“No one believed me because I had a four-year contract. But then I called Anzhi and came to an agreement.”

Nothing we (and Jose Mourinho) didn’t already know. That said, Eto’o will still have to go some distance to out-ego trip the high command at Chelsea. A couple of hours in JT’s windowless bunker dungeon at Cobham and a couple of snooker balls in a sock should be enough to straighten out any Johnny-come-lately.