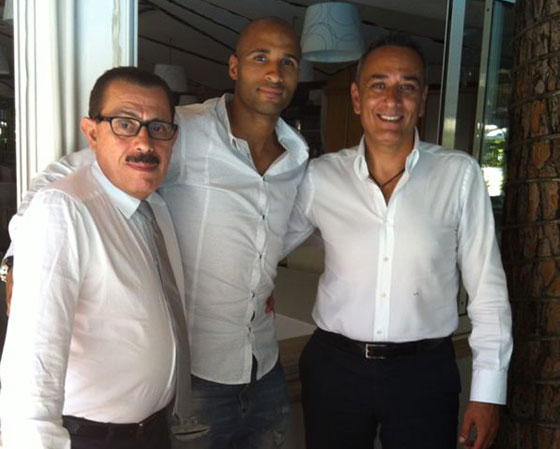 Kamara: Back in the U.S. Catanzaro

Diomansy Kamara has definitely done the rounds as far as his career is concerned, having signed up for stints in the French, Italian and Turkish leagues as well as stints at Fulham, Portsmouth, Leicester City, Celtic and West Brom over the years, but nowhere, it would seem, has the Senegalese striker made more of an impression than at Italian third-tier side U.S. Catanzaro 1929.

Having played three games for a local Parisian side, Kamara got his professional career up and running at Catanzaro between 1999 and 2001, going on to score a relatively modest nine goals in 34 league appearances for the club.

However, despite flirting with retirement after being released by Eskisehirspor at the end of last season and having first left Catanzaro over 13 years ago, Kamara was co-erced to play on by the fans of the Italian Lega Pro minnows, who went all out to persuade their club to re-sign the veteran striker on a free transfer.

Such was the clamour for Catanzaro to re-sign Kamara, fans actually set up a Facebook campaign to get him back, with 12,000 fans “liking” the page to show their support for the plea.

Low and behold, Catanzaro president Giuseppe Cosentini worked his magic and persuaded Kamara (known as “Joe” to the Catanzaro fans for reasons unbeknownst) to re-sign for the team, admittedly “breaking his budget” to bring the 33-year-old forward in on a freebie.

“After having personally got to know Joe and seen how attached he was to the Giallorossi colours, I decided to make this dream of our fans come true.

“I did it for the love of Catanzaro and because I want to lead the Aquile (Eagles) as high as possible, together with Kamara.”

Kamara himself then added:

“Between me and Catanzaro, there is a love story which can never end as far as I’m concerned. When I heard of their interest and met the president, I couldn’t refuse.

“I’m at home in Catanzaro. I’d like to thank the people of Catanzaro who have shown me so much love and passion. I want to tell them that I’ve come back here to win, and to get promoted to Serie B straight away.

“I’ve come to Catanzaro to stay here, in this city and with this club. It’s a really big decision for me.

“I did not get a great deal out of French football, but Catanzaro gave me a lot.

“I want to end my career here and it fills me with pride to know that the Giallorosso shirt will be the last one I wear as a professional.

“It really is a dream for me to return to finish my career here where it all began.”

The striker then took to Facebook to thank the Catanzaro fans for making the move happen, saying that the supporters had taught him an “extraordinary lesson in life” with their dedication to the cause.