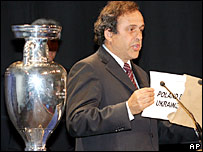 Against the odds, the odd couple of Poland and Ukraine (trips off the tongue, doesn’t it?) have been chosen by Uefa to host the European Championships in 2012. It will be the first time that either nation has ever hosted a major football championship. The announcement, made by Uefa president Michel Platini in Cardiff today, came as a big shock to most â€“ Italy had been widely tipped to win the vote.
Four Ukrainian cities and four Polish cities have already been pencilled in as host cities: Dnipropetrovsk, Donetsk, Kiev and Lviv (Ukraine), and Gdansk, Poznan, Warsaw and Wroclaw (Poland).
I think it’s great that two lesser footballing nations get to host a major tournament at last. Congrats to the authorities in Poland and Ukraine.