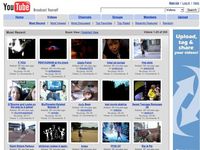 The FA Premier League initiated legal action against YouTube on Friday for copyright infringement, which could be bad news for football fans everywhere. If you miss Match of the Day on Saturday night/Sunday morning or Sky’s Super Sunday, YouTube is the first port of call to catch up on any Prem action you have missed.
Hmm, a few things the geniuses at the Premier League would do well to consider:
1) You can’t regulate the internet – stop one person from posting football clips and another 100 doing the same thing will take their place – did the music industry stop the flood of MP3s online? Of course not. As quickly as clips are taken down from YouTube, they will be reposted, either on YouTube again or on other sites.

2) This sort of thing only alienates the fans. And how is free publicity for your product a bad thing?
3) As the chaps at 101GreatGoals – the football blog most threatened by this development â€“ point out, the mainstream media now rely heavily on YouTube clips, not just bloggers like us. The Guardian’s sports blog even has its own YouTube round-up of the week. So this isn’t just about a few football bloggers with broadband access and a computer. If you take us on, you have to take on the national media too.
Until instructed otherwise, we’ll continue to post video clips – they enhance the site greatly and as genuine fans we don’t see how we’re possibly damaging the Premier League. Quite the opposite in fact – we’re helping to promote the greatest league in the world.
(The fact that YouTube is now owned by billion-dollar company Google has nothing to do with the timing of this litigation. Nothing at all.)