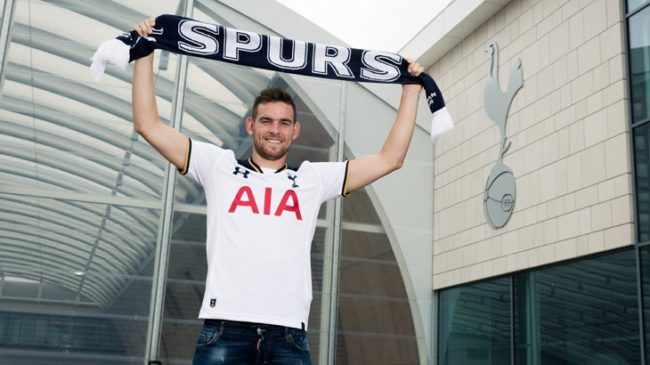 We’ve done a little digging and it turns out new Tottenham striker Vincent Janssen has quite the family sporting pedigree. His mum, Annemarie Verstappen, is a multiple Olympic medal-winning swimmer.

She won a silver and two bronze medals for freestyle swimming at the 1984 Los Angeles Olympics. Between 1982 and 1985 she also won a total of 11 medals at World and European championships, including a gold in the 200m freestyle final at the World Championhips in Guayaquil in Ecuador in 1982.

That same year she was named Dutch Sportswoman of the Year, and in 1983 she went on to claim the world record in the 50m freestyle. Here she is preparing for competition…

Janssen, signed from Dutch outfit AZ Alkmaar for £17million, was top scorer in the Eredivisie last season, with 27 goals in 34 appearances. That made the 22-year-old the youngest player to net 25 goals in the Dutch top flight since Ronaldo (the original, non-Cristiano version) in 1994-95.

Janssen is a two-footed striker whose hold-up play has attracted almost as much attention as his goalscoring. With movement and passing also strengths, it’s clear why Spurs manager Mauricio Pochettino has moved quickly to land him.

Pochettino has described Janssen as a “perfect fit”, singling out the players’ “quality in the box” and willingness to “fight and work for the team”. He also took time to praise Janssen’s “human profile”, underling the importance placed on character and attitude at White Hart Lane.

The big question is whether Janssen has been signed as cover or compliment to undoubted number one striker Harry Kane.

Kane has shouldered the responsibility of leading the line for Spurs pretty much single-handedly for almost two seasons, and the worry has always been what would happen if he burned out or gets injured.

Signing another striker is therefore good business for Spurs, but Janssen doesn’t look to be the kind of player who can play the front role in the 4-2-3-1 that Pochettino has preferred.

And, moreover, it’s unlikely the player would have been so keen on signing if he was there solely to play second fiddle.

Janssen has said he thinks he could play alongside Kane in a starting line-up, and it does seem a mouthwatering prospect.

Pochettino did adopt a free-flowing 4-3-3 formation in his final months at Southampton, and some of the players Spurs have been linked with could suggest that’s something he’s looking to do again.

What Spurs really need is options and variety in their style of play. Last season was a very successful one, but there were indications towards the end that other teams had worked out how to stop Spurs.

To move on, Pochettino needs to be able to change tactics, to use his bench to mix up approaches, and to use his squad flexibly. Janssen looks a good signing who increases the possibility of those things happening, and my guess is that we’ll be seeing him, and Kane, deployed in a variety of ways in the coming campaign.

Spurs fans will be hoping it all goes… ahem… swimmingly.