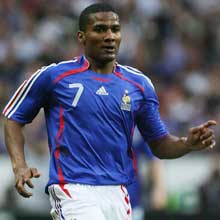 Just when we thought that the purse strings to Roman’s rubles had been tied closed with all the endeavour of an over enthusiastic boy scout, Chelsea actually look set to spend some money.
During the close season we’re used to seeing Moneybags FC fritter away millions on overpriced, overpaid and over here imports. But, so far, only three free-signings, Claudio Pirazzo, Tal Ben Haim and Steve Sidwell, have been added as understudies to the stars.
Although Chelsea’s Â£12m bid for French winger, Florent Malouda, is still short of Lyon’s valuation â€“ not surprising since they managed to milk Â£26m for Michael Essien when Chelsea were still frivolous â€“ it looks like he will be soon be a bleu.
Money well spent or is Mourinho just trying to annoy Rafa again?