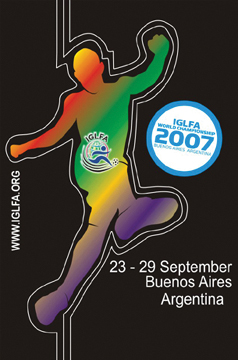 Latin America will host the gay football world cup for the first time in the tournament’s 16-year history when the event kicks off this weekend in Buenos Aires. Twenty-eight teams, many representing cities in Europe, the United States, Australia and Latin America, as opposed to countries, will play in the International Gay and Lesbian Football Association’s (IGLFA) competition.
Buenos Aires is one of the most gay-friendly cities in South America and as a result, has become a gay tourism magnet and has also legalized gay civil unions. “The players approach it with a lot of enthusiasm and strength. We’ve been preparing for a year and we want to win,” said Nestor Gammella, trainer for one of the Argentine teams. Football federations elsewhere in the region have not been so supportive.

“We’ve knocked on a lot of doors, many of which did not open. A lot of people just stare and don’t support us,” Andoni Bello, captain of Mexico’s Trigay team, said this week in Mexico City.
Bello said the Mexican Football Federation declined to support them in a public letter sent in March. A Mexican team is in the event for the first time thanks to support from other groups, he said.
“If gay-lesbian soccer exists it’s because gays and lesbians can’t play the sport without suffering discrimination,” said Cesar Cigliutti, president of the Argentine Homosexual Community gay advocacy group. “The sports world is very homophobic, very discriminatory and soccer is a prime example. That’s exactly why these championships were born,” he said.
It’s a shame that this kind of discrimination still exists and we’ve seen Manchester City trying to rectify the situation with their ‘gay scheme’. What needs to happen to stop this blinkered view? Perhaps a top-flight footballer needs to come out? Your thoughts readers…
To visit the IGLFA official site, click here.