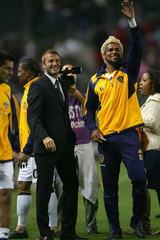 David Beckham could make his LA Galaxy comeback this Thursday against Red Bull New York. Becks is reportedly close to full fitness and may figure in the Galaxy’s must-win clash against New York this Thursday, which is followed by the potential play-off decider against Chicago Fire on Sunday.
Beckham, pictured here with team-mate Abel Xavier after LA’s 2-1 win against Toronto, said: ‘I can sprint and run and I now I just need to work on striking and passing the ball a bit more.’
Should Becks even get his starting spot back though? The Galaxy have been doing pretty well without him recently â€“ five wins in five games â€“ and I wonder how his team-mates will feel about his return.
Photo Getty Images