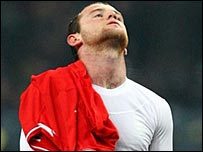 Hate to say I told you so, butâ€¦ I told you so.
I’ve read a fair bit of response on footy forums to England’s painful defeat in Moscow, and most of the blame seems to be aimed at Steve McClaren. This is nonsense. McClaren steered England to five consecutive 3-0 wins, had the balls to bring in Gareth Barry and drop Frank Lampard, and in my opinion got the tactics just about spot-on tonight. No, it’s the players who must shoulder the blame for not having the heart, technique or maturity to cope with a Russian side invigorated by Guus Hiddink’s half-time boot up the arse. As Sven said when he was asked why he didn’t take England further in major championships, ‘I didn’t have Elano’. And that’s the point: we don’t have the tools do go to a place like Russia and do a job. Steven Gerrard is an admirable footballer in many ways, but he is not the calm head we require at the centre of our midfield; he is more of a headless chicken.

The first half went perfectly; the second half was a nightmare. Forget the fact that Wayne Rooney’s foul was outside the box â€“ as Graham Taylor said on Radio Five Live, Russia deserved to win the game. They could have scored three or four in the second half, so superior were they.
The England team froze like rabbits-in-headlights. They couldn’t keep the ball â€“ a typical English failing â€“ and basically invited Russia to attack at will. Once Steven Gerrard had missed that sitter from eight yards out, Russia seemed to gain strength and realise that they could get more than a point from the game.
Man of the match for England? Sol Campbell, who is the best backs-to-the-wall defender in the country. Another brownie point for McClaren then, who realised that Campbell is a world-class centre-half, still â€“ many journalists questioned Campbell’s inclusion and they were proved wrong. By contrast, Joleon Lescott, current darling of many judges, had a very poor game. Lescott is a fine young(ish) player, but he was played out of position â€“ and I don’t blame McClaren for that, given that Phil Neville and Nicky Shorey were the alternatives â€“ so can’t be criticised too much.
I fully expect the usual England manager witch-hunt in tomorrow’s tabloids, but that’s unfair on McClaren, who did about as much as he could to secure the required point in Moscow. I have slagged the man off in the past, but he has convinced me that he has at least learned something about the art of management from mentors Alex Ferguson and Sven-Goran Eriksson.
However, if England don’t qualify for Euro 2008, he will surely lose his job, no doubt at the expense of another big-name foreign manager â€“ Jose Mourinho perhaps? And whilst I’m supporting McClaren here, I will say that his motivational ability is questionable. He’s certainly no less tactically astute than someone like Jose, but modern football requires a manager with charisma as well as the requisite coaching badges. Shame â€“ I was just getting to like Mac as wellâ€¦