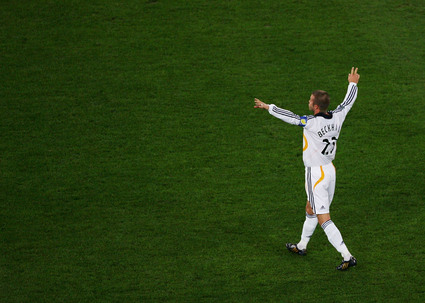 Barbara Walters, veteran American journalist/TV personality, has named David Beckham (and missus Victoria) as one her Most Fascinating People of 2007. I know what I’m buying Walters for Christmas – a good dictionary, so she can look up the true definition of the word ‘fascinating’.
I suppose she has a point – like most of the football media, Pies features Beckham more than any other footballer. His LA adventure quickly lost its allure, but until he retires, we’ll continue to keep half an eye on his career. Do you find him fascinating, Pies readers, or are you bored with his exploits?
‘Barbara Walters Presents: The 10 Most Fascinating People of 2007’ will air on ABC on Thursday, December 6. No doubt we’ll put up a YouTube clip of said show in the week after it screens Stateside, so watch out for that.
To see Walters in action in a clip from her ‘Most Fascinatingâ€¦ of 2006’, click belowâ€¦