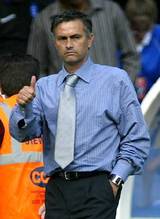 Of course John Terry wants Mourinho to be the next England boss. They enjoyed great success together at Chelsea, and hugged frequently, in a mannish, completely non-homoerotic fashion.
Do you want Mourinho though? He would be a better bet than Steve McClaren, for sure, but I worry that he’d get bored with a job that is effectively part-time, and also frustrated with the constant tabloid glare â€“ I know he is an attention seeker, but I don’t think anyone knows just how intense being England manager is until they are in that hot seat.
I also worry that Mourinho is playing the FA, merely using the vacant position to remind the big clubs in Europe that he is available and misses football. The FA has to call his bluff and offer him the job this week â€“ that’s the only way to find out if Jose really does want the job.
Vote after the click to have your say on Jose’s futureâ€¦