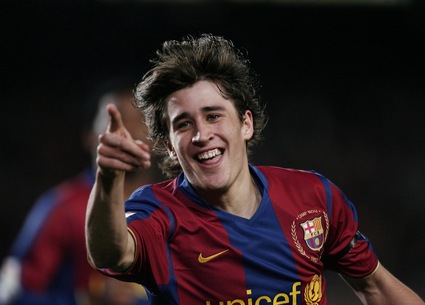 Barcelona wonderkid Bojan Krkic, 17, is eligible to play for Spain and Serbia. His dad, also called Bojan, is Serbian, whilst his momma is Spanish. Luis Aragones has just called him up to Spain’s senior squad for the friendly against France, a move that essentially says to the Serbian football authorities: ‘Krkic is our player now, hands off!’
It always seemed likely that Krkic Jnr would choose Spain over Serbia – he was born in Spain, after all, and has played for Spain at various youth levels. Serbian football fans will be a bit gutted that one of the brightest young talents in world football won’t get to play for them; just like many England fans were gutted to find out that Ryan Giggs played for England as a schoolboy international, and could have picked the white shirt, instead of the red of Wales.