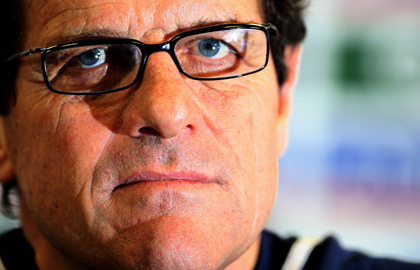 We wonâ€™t know until later this evening but if the rumours being leaked about Fabio Capelloâ€™s first starting line up are true then you can expect more than a few surprise selections and a different system being used.
The new manager is apparently ready to play a revised 4-2-3-1 system that heâ€™s tended to favour with his previous clubs. But, while this could be the making of England stars such as Joe Cole and Matthew Upson there have been a few big name casualties along the way.
We all know that Becks never even made the squad this time around but click through for a look at the other expected changes and let us know if they are likely to make or break the England team as we know it.

The biggest name expected to be dropped is Michael Owen who shouldnâ€™t be that surprised given his form during another injury plagued season. Capello prefers to use a lone striker and Rooneyâ€™s power and strength fit that role more than mini-Mickey.
Instead of a supporting striker, Capello intends to free Joe Cole from his left wing shackles and play him in the hole behind Rooney where his creativity can flourish the most. Heâ€™ll play with two pacy widemen either side of him, which should spell debut starts for David Bentley and Ashley Young.
That leaves Steven Gerrard playing slightly deeper than he may like with Owen Hargreaves behind him providing cover for the back four â€“ although there have even been suggestions that Rio Ferdinand could eventually be used ina sort of sweeper role.
If the first team training session is anything to go by then Capello will favour experience over youth by picking Wes Brown ahead of Micah Richards at right back. And, perhaps the biggest surprise, is the inclusion of Matthew Upson alongside Ferdinand in the centre â€“ where Capello is reported to favour a natural left footer.
Meanwhile, David Jamesâ€™ current form and a lack of decent cover should see him between the sticks despite his age.
If this is Capelloâ€™s first line up let us know what you think of his selection and system.