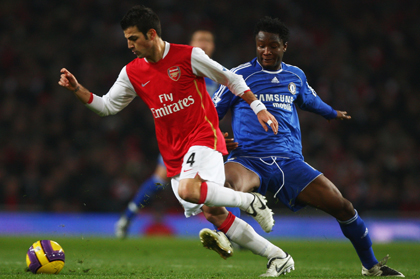 Each of the so-called Big Four clubs â€“ Man United, Arsenal, Chelsea and Liverpool â€“ has a young jewel in their crown thatâ€™s been dazzling in the Premier League this season. Thereâ€™s Cristiano Ronaldo (22) at United, Cesc Fabregas (20) at Arsenal, John Obi Mikel (22) at Chelsea and Fernando Torres (23) at Liverpool.
But who will be go on to be recognised as one of the greatest ever players in five years time when they should all be at their peak?
At the moment, Ronaldo (23) is leading the way and some would claim the twinkle-toed winger is already the best player in the world. Cesc Fabregas (20) pulls the strings at Arsenal and will no doubt captain the side one day while â€˜El Ninoâ€™ Torres (23) looks like a world class striker in the Premier League. And, John Obi Mikel at Chelsea (20) already looks as good as Viera used to.
Click through to vote for who you think will become the biggest legend.