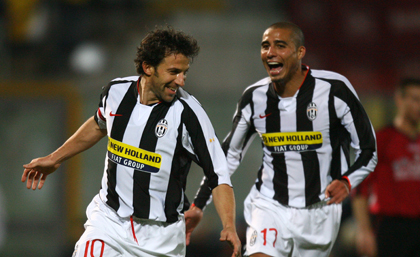 Remember the so-called Calciopoli scandal in Italy that exposed several leading Serie A teams for influencing the outcome of games?
Juventus were hit hardest and relegated to the Italian second division while other teams including AC Milan were deducted points. Since then, Juventus have returned to Serie A but there is plenty of fuss being made that they are still paying the price for previous indiscretionsâ€¦

This last weekend, Juve were denied what seemed two clear cut penalties against Reggina while their opponents were awarded a highly contentious spot kick in injury time â€“ eventually losing the game 2-1.
Even the normally reserved manager and part time village idiot, Claudio Ranieri, was up in arms and complained that anti-Juve officiating had been happening all year.
Referees could be reluctant to award Juventus important decisions in light of recent history â€“ in case they are seen as favouring the Old Lady. Then again, these just be honest mistakes that coincidently seem to occur during Juventus games.
Let us know if you think thereâ€™s a conspiracy plot to keep Juventus from winning the Italian League – we’d especially like to hear from any Italian Pies readers.